[introduction to collection]: "Xianfeng" is the year name of Wenzong in Qing Dynasty. Xianfeng was at the climax of the Taiping Revolution. In order to survive, the Qing government made a lot of efforts in coin casting and passed the financial crisis on to the common people. Three kinds of ancient coins, Xianfeng Tongbao, Xianfeng chongbao and Xianfeng Yuanbao, were successively introduced. Among all the coins of the past dynasties, Xianfeng chongbao has a very noble status. Its coin body has a thick texture. In addition, the calligraphy on the coin face is straight and beautiful, the fine carving, the big characters with glittering copper, the ancient paste, and even the details are carefully carved and almost perfect, showing its own unique aristocratic appearance and high historical value. 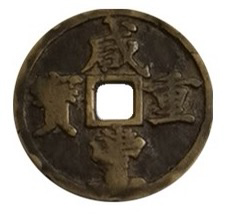 Xianfeng chongbao Dangshi coin is a typical representative of the coins cast in Xianfeng Period. It was cast earlier and circulated more widely. It is very popular among collectors. Moreover, due to its long casting time, it has always been the leader of the coins in Xianfeng Period, which has great historical significance and is very worthy of collection. 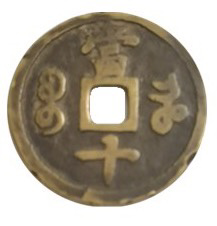 This Xianfeng treasure Dangshi is a round copper coin with square holes, which is a rare treasure. On the front, there are four characters of "Xianfeng chongbao" in regular script, which are read directly from top to bottom, right to left. On the back of the coin, there are two characters of "Dangshi" in Chinese, indicating the value of the currency. On the left and right, the name of Qianqian is written in Manchu. The copper coin with a round square hole on the front has the shape of heaven outside and the method of interior, which takes the meaning of essence and greatness. Looking at the picture, the shape is mellow and dignified, the handwriting is clear and deep, and the paste is thick and warm. This kind of copper coin is very exquisite, the writing is clear, deep and handsome, the copper material is excellent, the writing is exquisite, and there is not a trace of tardiness. It is slightly larger and heavier than the common coins of the same edition. It is a rare thing.